Rain was forecast to be a constant companion for our week of walking, but after a good breakfast of omelettes and tostadas, we managed to get out in a pocket of sunshine. Then up the hill, down the hill and we were in lush green countryside. I am always amazed at how quickly it changes from the town, and one of my favourite parts of this day’s walk is the slow uphill path through the huge old trees. I often hang back to have it to myself, but this time it was no problem – only two other pilgrims and a lady who could be local, with no other kit than an umbrella.

Sadly Casa Morgade was closed, so our planned lunch was postponed. We had lovely weather most of the time and had Goldilocks temperature – not too hot and not too cold, but just right. So into the Galician woods we went.

We soon renamed the trail Camino Creek, or the Magnificent Mudtrail! I chose to walk in the small trickle of water, at least then I avoided the worst of the mud, but it was an all-round tricky, slippy, sloshy and dirty walk. But hey, that’s what Goretex is for!

The hidden bar and albergue gem in Mercadoiro was also closed, so we just carried on. Finally Portomarin came into view and we got to the point where you have to choose your path, and as I have noted before, in my opinion one of the new options is not safe unless you are very steady on your feet and preferably in company. Here are the photos from 2016:

The other new option is longer and not as steep compared to the old route, which I prefer, so when we got to the road and the markers, we were happy to see that the old option was marked with an arrow again! So we went to the right and took the old way down towards That Bridge. If you have followed me for a while you know my feelings about That Bridge. It’s pretty enough from a distance, and it’s fascinating to see the other, normally submerged bridge and the walls of the old village, which was moved up the hillside to allow the valley to be flooded. 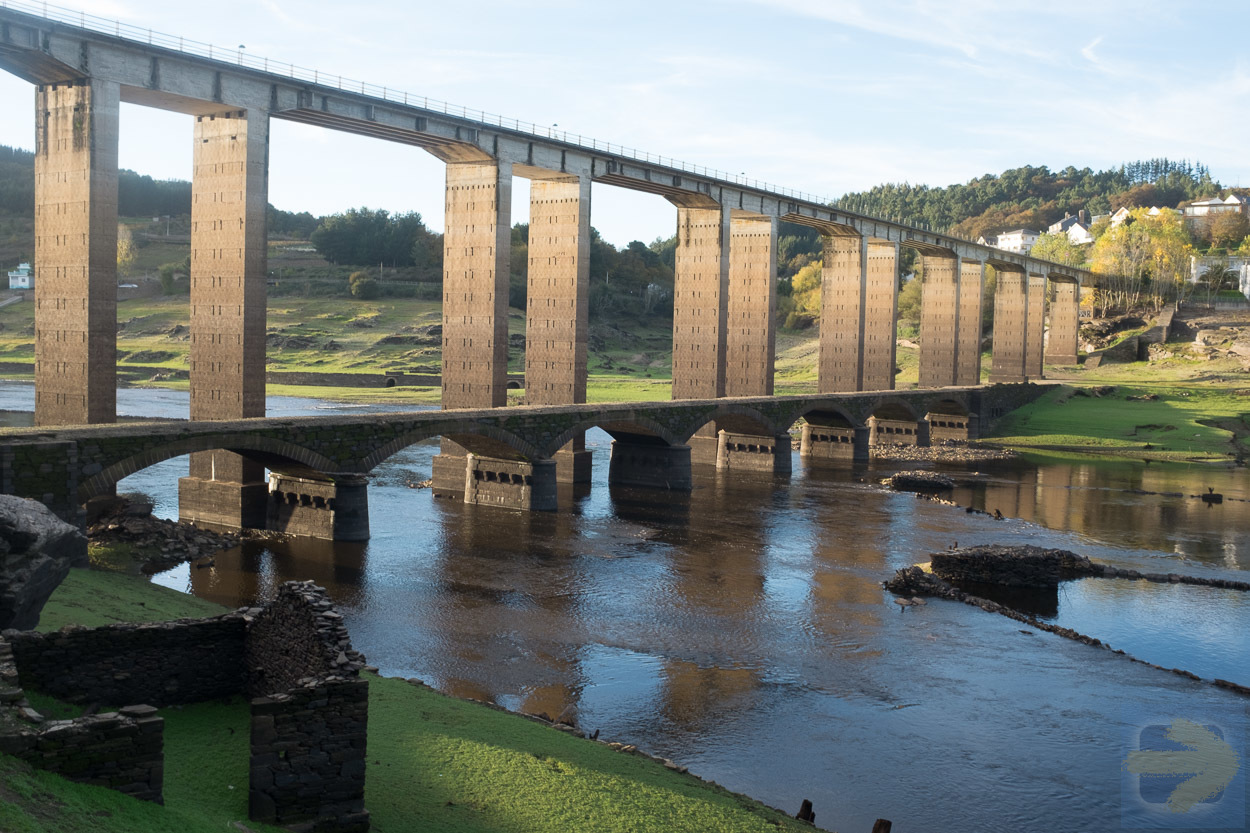 But it’s tall and it’s narrow and it’s long and the pedestrian lane has only a simple rail separating me from the freefall, so I don’t like it. At all. In any way. I walked across it in 2012, in 2014, twice in 2015, in 2016 (and taxied across it in 2017), so I do manage, but I dread it every time. In 2015 I got over it with B’s help when a chubby, slow pilgrim with a huge backpack suddenly stopped mid-bridge and started taking pictures, blocking the pedestrian path, and I panicked and stepped into the car lane, where B took my hand to calm me down. Then we talked about cheese (?) to take my mind off it until I was safely on the other side. This time I thought I would show That Bridge who is boss! So instead of taking the car lane, I chose the narrow pedestrian path, looked straight ahead and muttered my mantra: Peregrina soy, a Santiago voy! And I did it! I deserved a treat!

Which I had already booked, in the shape of the Maestro hostal directly behind the church. We had decided we wanted to have some luxury, and we were not disappointed. The room was not big, but the beds were, and the bathroom, and the shower … which had frosted glass towards the bedroom, but it works. There was even a hair dryer in the wardrobe, what joy! The walled-in outside space would be glorious in summer, you can sit outside in the evening looking up at the church.

We were pretty tired and hungry, and there was an Italian restaurant across the road, so we decided to go for an anchor beer there (in fact it was a glass of albariño) and ended up staying and having pizza and pasta and more wine. Then back to the room, where we quickly fell asleep.