Waking up in O Cebreiro I could hear the wind whipping at the corners, and looking out the window it was still snowing. I had a choice to make – I was going to meet my camiga B in Sarria that evening, so I could either walk from O Ceb to Triacastela and get a taxi to Sarria, or get a taxi from O Ceb to Triacastela and walk to Sarria. Considering the weather the second option sounded a lot more pleasant, as I would start lower down the hill where it would be warmer and hopefully not so snowy and windy.

So I went to the bar downstairs for a morning coffee and asked Irene to book me a taxi. She told me she was going to drive down to Triacastela and Sarria that day anyway and offered me a lift as soon as breakfast service was over. Plus, she said, the way the weather is, it is best to wait and see if it gets better, and if the roads stay safe. 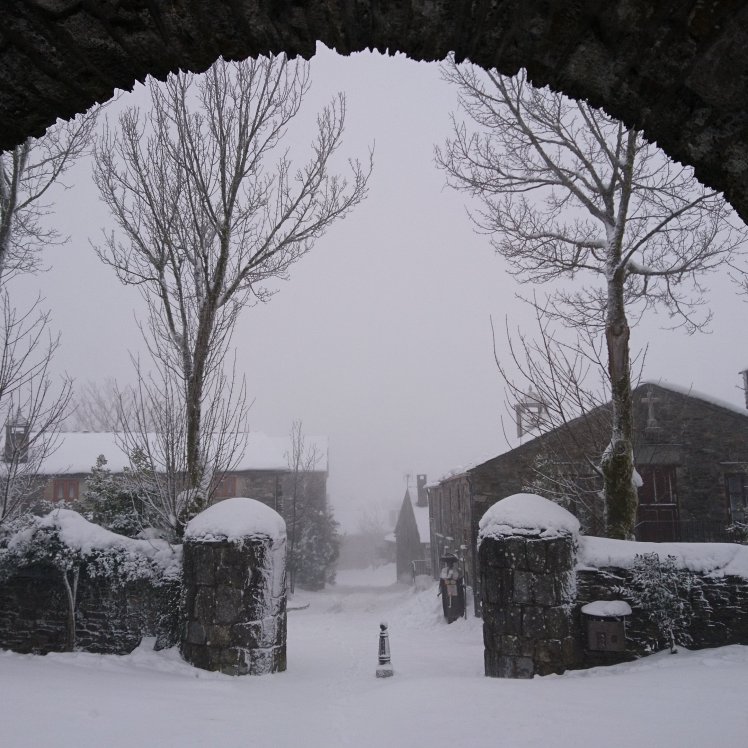 An hour later it was clear that they wouldn’t. There were ploughs driving up and down clearing the snow every half hour, but on the ‘camino’ road facing the valley, the wind kept blowing snow over the inner lane, where pilgrims would be forced to walk as the actual trail was covered in deep, wet snow and potentially dangerous. By the time we got ready to leave, the man driving the plough suggested the country lane wasn’t safe with normal tyres and he advised us to go the long way around to get on the highway, which was dry. I am Norwegian and worried about driving on wet snow that could turn to ice any minute with essentially summer tyres, so I was happy to take the longer and safer route. It was getting too late to do a whole day’s walk anyway so getting a lift straight to Sarria made everything easier. 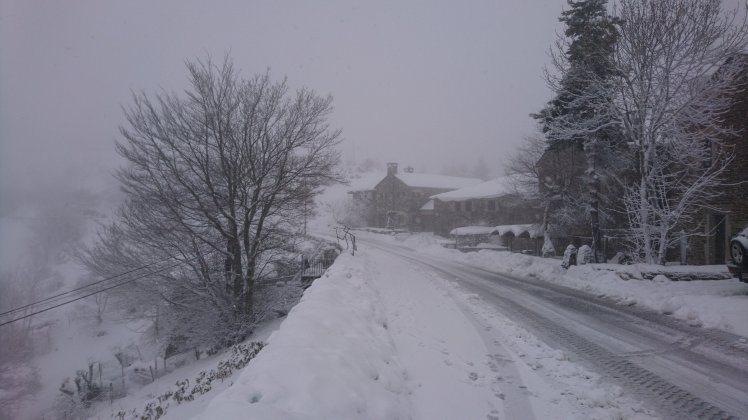 The driver took his time and got us slowly, but surely and safely down the wintery hill and onto the main road further down. I was worried about the pilgrims walking on the valley side with the icy winds, especially the two cyclists I had spoken to before we left O Cebreiro and our kind diner from last night … I hoped they were all OK in this weather.

As soon as we got on the main road, getting to Sarria was easy – and fun, as three nationalities conversed about life, politics, languages and pilgrimage in English and Spanish. When we arrived in Sarria, we had a goodbye drink before they drove off.

Then up the stairs I went to the room I would share with my camiga. It seems I was the first person to arrive for the season, everything was freshly painted and cleaned, I was given a spare heater for our room and told that the bar would open ‘later’ – as I found out, they were still unpacking cups and plates with the help of the whole family. I asked for a glass of vino tinto to warm me up and got a rather marvellous tapa with it:

Not long after my camiga appeared, and we immediately started unpacking, comparing packing, admired her new pack (an Eja 38, swoon!), organised ourselves-ish and then went for a meal up the hill. A few others in the small and cosy restaurant looked like solo pilgrims, but since we had so much to catch up on, we didn’t seek more company. After the bottle of albariño was empty, we went back to our room and tried to get a good, long night’s sleep before our first walking day together.