When I woke up in Pontedeume I was wondering what all the noise was. After a quick look out the window it looked like the Middle Ages had reappeared! Men were hanging flags and banners with coat of arms and golden tassels, which were stored in a large wooden trunk. I had to find a shop before we moved on, so I went out and had a look. Apparently there would be a Medieval market that weekend, which we’d miss.

Then I went to buy superglue, though I had no idea what it was called in Spanish, plus bananas and nuts. I found a small supermercado and asked the man behind the counter, and he called a woman who spoke perfect English and had a choice of glues. A little old lady was watching while I pointed and tried to do smalltalk (“I need to superglue the stickyback velcro to my shoes or I get sand in them”), and then suddenly she broke into song: Peregrino soy/A Santiago voy … my mantra for scary bridges!! Turns out it was a big hit in Spain in the fifties, and the little old lady still knew it all by heart (including instrumental part near the end, which was hummed). Great start to the day!

Then I went back to glue said velcro – it can come loose in damp weather, so Superglue is hereby a staple in my pack – and after a brekkie of bread, tomato and yogurt at Bar Luis we were ready to move on to our next stop: Betanzos. I will not lie: It starts steep!

But at least the views are worth it. Just pretend you are taking a photo and catch your breath a while. Also it suddenly started raining quite heavily, so we stopped, pulled ponchos on and stood with poles out to try to protect the shoes. #fail. It kept raining on and off all day and in the end we just kept our ponchos on and accepted that our shoes squelched with water. 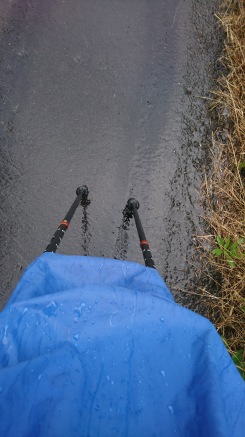 Then onwards and always upwards, it seemed. Now and again we were rewarded with sunshine and views of the estuary, sometimes the trail went into lush (damp) forest.

Or under a roof of vines!

The day went very quickly because we were still talking non-stop, and suddenly we were in Miño where we wanted to stop for lunch. We arrived with soaking wet hair and feet, but the rest seemed dry enough. Lovely and long lunch was had as every time we wanted to leave, it started raining again. So it would be another late arrival. 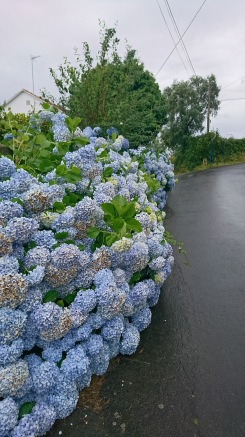 So when we did arrive at the Chocolateria café bar, where we had booked two nights, at six o’clock, it turned out they had given our ensuite twin room to someone else! We were then given the choice of two other twins without our own bathroom and since we didn’t want to argue, we took the larger of the two. The landlady said we could have the ensuite one the following night, and that she would move our packs for us when she cleaned, and we could pick up a new key in the café when we came back after our walk the next day. Not ideal, but better than trying to find somewhere else on a Friday night!

Two lessons learned here: 1) If you have booked and will arrive late – call and tell them. You shouldn’t have to, but there are so many people double booking and not cancelling (??) that your room could be gone after three o’clock. 2) The Chocolateria wasn’t my kind of place. Though it is cheap and has a kitchen, it is in a normal flat, and the bathtubs are lethal if you want to stand in them for a shower. Top tip: Wear your supergrip sandals.

The restaurant across the street has a good choice of dishes though, and wonderful albarinho! So after showering, laundry, dinner and restorative drinks, we went straight to bed and left sightseeing for the next day.