Yes, we are back again. (Though I seem to have completely forgotten exactly why.) Things were a bit turbo on re-entry into Normal, more of which later. Promise.

As usual we had decided to walk from Astorga to Santiago, 12 days of walking and a day and a half in Santiago plus travel. Everything was planned, booked and paid for well in advance, all we had to do now was walk and enjoy. We crossed our fingers for the weather, brought padded lightweight jackets and chose Goretex mid boots to be on the safe side, and also packed sunglasses and sandals. What could possibly go wrong?

Before we went to bed in Astorga, in the rather nice Hotel Gaudí just across the road from the Bishop’s Palace designed by the man himself, we were told to expect rain the following morning. Uh-oh. But when we woke up and opened the old wooden shutters and looked out at the Palace, there was no rain to be seen. So we got ourselves ready and decided to go down to the square for breakfast before we left town. And then the heavens opened! We got there to find there was a huge market covering the square, but ducked into the café at Astur Plaza for brekkie. When we came out again, so did the sun, and the skies were blue. So off we went. Spring had definitely sprung in Spain!

Not long out of town we came to the little chapel of Ecce Homo, and in front of it, on the left hand side of the road, there is a small park. In that park is a tree dedicated to the memory of Denise Thiem, an American peregrina who lost her life almost two years earlier, and who was last seen on the way out of Astorga. A man was convicted of her murder and sentenced to 23 years in prison as we came home. May she rest in peace and may I be fortunate enough to visit her tree many more times and see it grow.

The first place to stop is always Murias de Rechinvaldo, a tiny place which used to have a delightful café called El Llar with organic and vegetarian food and the best empanada known to humankind. Just outside the village we turned to look at something and I went straight into one of three metal poles sawn off at mid-shin height and got a cut and bruise. Wonderful! We found no open bars or cafés on the main (only) drag in Murias but by the main road one was open so I could sit down, plaster up and have a drink and a rest. After a while I felt sure there was nothing seriously wrong with my shin so we started on the long and straight bit up to Santa Catalina. Beautiful. Loved it.

We had reservations in Rabanal in the evening, so intended to have late lunch in Santa Catalina. But … when we arrived, there was no electricity, so no hot food, no draught beer and no coffee. We were sitting in the sun with an Aquarius each when my phone rang. It was the lady from Rabanal, who told us she too had no electricity, no food or light or heating, so no room for the night. The man behind the bar in El Caminante in Santa Catalina spoke to her and in the end rang a new place at the entrance to Rabanal village, called La Candela. They still had a room if we wanted it, and electricity, and food, so we took it. By then it was getting a bit late in the day and honestly quite chilly, so we accepted the offer of a cheap lift up to said La Candela. It was lovely! The people running it are very friendly and even have disabled-friendly facilities, the food was good and the location is spot on. You can’t miss it, it’s right by the road before the turn into Rabanal. 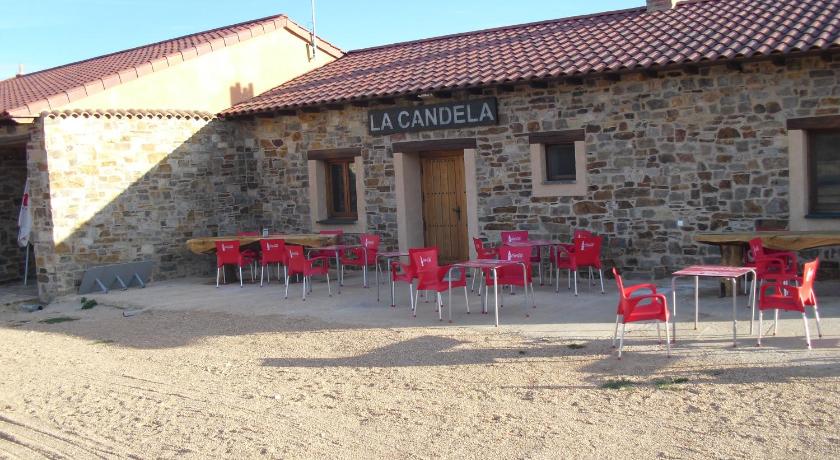 Unfortunately the rest of Rabanal was closed due to the leccie problems, but we spent a nice evening in and played the smallest and lightest game I could find before we left: Pass the Pigs! No, not the pilgs. Pigs.

The case is small, the pigs and pencils and pad are all tiny, the rules are bonkers, and it turns out I’m really bad at it. Scouse Spouse seemed to enjoy making the pigs somehow land in point-heavy advanced yoga poses, but when I threw them they slumped into the only nil point and therefore pointless lazy couch potato position. Go figure.

We didn’t really see many other pilgrims along the way all day, not until we came to La Candela, where there were six others.