The humble nail scissors are among my staple kit items. I know many would rather bring nail clippers because they are more precise, less fiddly, and there is no risk of having them confiscated at security if you travel with hand luggage only, like I do. In fact, scissors are on the list of things you’re not supposed to take into the cabin.

But according to general rules on cabin luggage, you should be able to take them as long as the blades are 6 centimetres or less. Any longer and it will be considered a weapon, and in a manicure set I suppose a metal nail file is more weapon-like than a pair of small (curved) nail scissors. This is why I always bring a cardboard based nail file, or my glass one which has rounded edges. The most damage I can do with that is to file a nail too close to the skin …

I keep my tiny nail scissors in my hanging toiletry bag for general travel and move them into the tiny first aid kit for caminos and other out-of-town adventures. 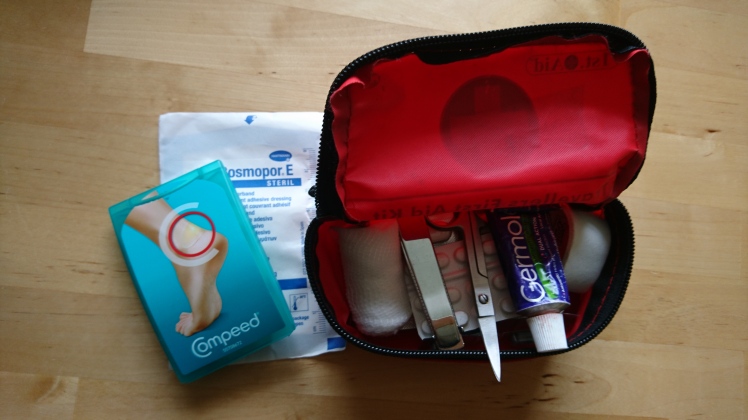 The blades on my scissors are 3 centimetre long. The X-ray at security sometimes picks up on them because they look like a longer, pointy metal object, so I keep them handy in my pack so I can take them out and show security personnel that they really are scissors. They are never confiscated.

As you can see from the pic above, I also bring clippers. That’s because they are sometimes better for just that, cutting nails on the road with maximum control. So why bring the scissors as well? I take them because they can cut things the clippers can’t:

Nail scissors cost peanuts and are practically invaluable when out and about, I never leave home without them. If you can think of more uses for them, I’ll happily add to the list!