On Day 2 we walked out of Carlisle, so we both had our full packs on – about 6 kgs each including water. I have a filter bottle and carry an empty 0.5 litre bottle as well so I can fill that with tap water anywhere to top the filter bottle up. Saves having to buy water along the way, which is easy on the Camino Frances, not so easy in remote areas of Northern England. So far I am very happy with it and the water tastes much better than most tap water (I am spoilt, having grown up in Norway with fresh clean water from the tap).

We got our second stamp at Sands leisure centre just outside the city centre, by the river. I would have gone off in the wrong direction from there, but the helpful lady insisted we go to the right and luckily we did as we were told. Outside the building, on the river facing side, were a row of stone cubes representing the forts on Hadrian’s Wall! 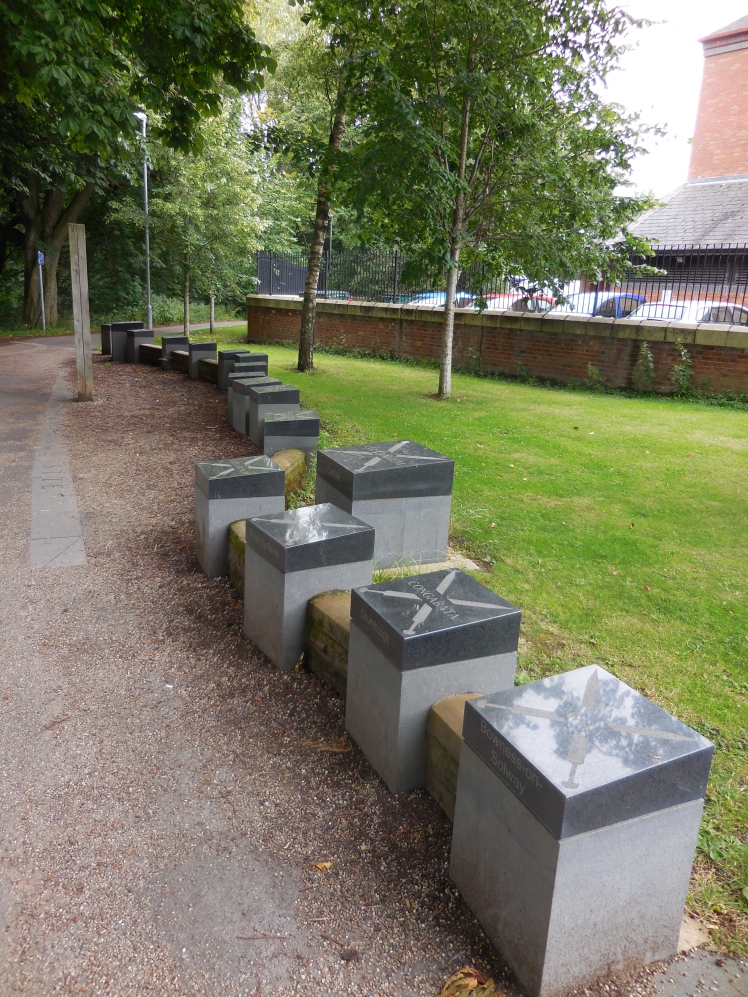 We then headed out of town, over a bridge and into a large park area with lots of dog walkers. We also met our first Hadrian’s Wall walkers coming the other way, a German couple who enthused about the ‘middle bit’ – something we would hear again and again. After the park there was a bit of tarmac walking again and according to the guide book there was nowhere to stop until Lower Crosby, where there was a promising establishment called The Stag Inn. We got there just as the rain started in earnest, and got through the door ten minutes before it was due to close for the afternoon. As it was, the manager was waiting for a delivery and let us sit the rain out. It was a really old and creaky-cozy place and I wish they had served food as I was getting a bit hungry. Imagine eating here:

Then it was time to get moving again. We walked into and out of fields a lot, luckily there were mostly sheep but also cows. My personal least favourite was fields of young bulls, but I think they were so used to seeing people walking past in a straight line they just didn’t care anymore. We also walked past Bleatarn, a (disappointingly) small body of water, formerly a quarry where apparently the Romans got their stone from to start on the proper sections of wall. Which hopefully we would start seeing the next day, but we could already see the man made dips and mounds in the landscape.

If walking this Path, prepare to do it in stile. Lots of stiles. And kissing gates. And gates.

We had booked a room at The Orchard House in Newtown, a tiny place with two B&Bs and a few houses, which apparently once had a pub that served food in the evening, but not any more.

The owner had kindly offered to drive us to the nearest town for our dinner and refreshments, and gave us taxi numbers to get back again. When he tried to book a table in the best place to eat, it turned out everywhere was full. We still went into Brampton, had some food at the local chippy (lovely chicken kebab!) and then went in search of a pub with a free couple of seats. One was closed, one was rowdy and the third one was just right!

Strangely when I came to order drinks, the barman told me that ‘his’ (The Scouse Spouse’s) drink was already paid for by ‘the Wall walker’ which sounded weird and wonderful at the same time – was this some sort of Hadrian’s Wall Path walkers secret pay-it-forward thing we didn’t know about? And why his drink and not mine? With his long locks he is pretty recognisable so it never occurred to us to question that it was indeed for him. As it was, there was another Wall walker there that night but he intended the pint for another man who had sat on the Scouse Spouse’s seat half an hour before we got there, as we found out when the barman pointed the Wall walker out to us and we went to thank him. This led to us getting to know the Wall walker and his fellow walkers as well as the local man whose pint we had ‘stolen’ and then obviously replaced. A good night was had by all!

In the morning we were treated to a breakfast of fresh fruit and berries, cereals and muesli, yoghurt, milk, juice, coffee and tea as well as a choice of English breakfast staple items. We stuffed ourselves to the gills and then went on our way in search of some proper Wall!