Day three started with much better weather, though it was still a bit cool and the clouds looked ready to provide rain or snow again. We had a little bit of breakfast and chatted with the few others who lingered after 8, a German speaking couple and our Americans. Then off we went, for Part Two of The Great Downhill, which was luckily dry and safe. We even got sunshine as soon as we hit the trail proper!

One thing I have never managed to do, is to stop at the first village after Acebo. There are signs to a bar which I always thought was up there in the street, but always looked shut. It turns out there is one, but you have to go a lot further down that street … the place is lovely! Posh chandeliers as well, and they had the news on. (Sadly the news that day was from London, where there had been a terrorist attack … we stayed until we had got all the info we were going to get. For once I would have preferred the mindless Spanish soaps.) Then on we went, down the hill, until we got to beautiful Molinaseca. 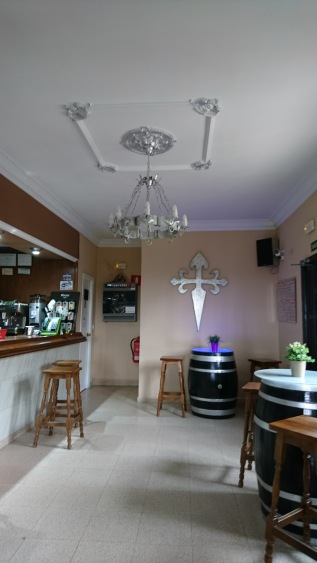 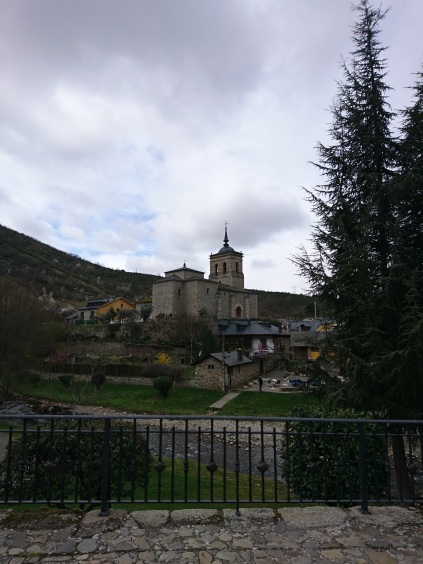 We met up with the two Americans again (one still with no word about his pack, so still in jeans and trainers) and when we came across the bridge we looked around for somewhere nice to have lunch. This being before Easter, nowhere immediately next to the bridge was open, but a lady waved us into what looks like a small tienda (shop) which has two small tables in the middle of the floor, and four chairs. That was it – we packed the house! She made fresh bocadillos and served a fantastic tortilla, and we helped ourselves to cold drinks from the chiller an arm’s length away.

Then there was one more thing we needed to do – stop by the place where we had stayed on our honeymoon Camino and tell the man who always runs, not to run. So we did.

When we came out the clouds were darkening fast, but we started walking along the boring and tarmaccy pavement to get to Ponferrada, our home for the evening. No sooner were we too far away to want to turn around, then it started raining hard. No matter – we had padded jackets and ponchos and goretex boots, and with the chill and grey rain came an absurd sense of humour, so we giggled and laughed our way along the road and into Ponferrada.

After checking into the hotel we went for a wander, bought a much needed knee support, had a drink in the brownest bar in town, and came across the completely unexpected Plaza John Lennon!

Unfortunately it wasn’t a Plaza with plastic chairs and a few bustling café bars, as we would have liked, but still. It was there! And so were we!

By this time it was getting to dinner time and we decided to check out a nice looking place to see if they served food. They did – in two hours. There were more pilgrims there, but the pre-Easter crowd doesn’t seem to reach out and mix in the same way summer pilgrims do. Or maybe they are just more hesitant to talk to a couple, thinking that we want to be on our own and they will disturb us if they do. I wouldn’t have minded, but at the same time it was nice to feel that we weren’t obliged to talk to people just because they were there.

Also we were tired, cold and hungry, and decided to eat at the hotel because it was 1) close to our bed, 2) guaranteed to be serving food, and 3) had comfy chairs and the heating on. Regarding 2), it turns out they had their menus mixed up so the chicken I wanted had been and gone last week, but when I chose it the lovely waiter (who had no other guests to look after anyway) asked the kitchen to make it for me – and they did! All the dishes were lovely and we practically rolled into the bar after due to 3) the comfy chairs and heating was making us too comfy and sleepy, so we went for the harder seats and a night cap and then an early night.