In the morning we had breakfast downstairs and in came M, who seemed to always pop up unexpectedly. She had secured the last bed in the biggest albergue in Palas de Rei at about four in the afternoon the day before – and we came into town about six! If we were going to have any chance of getting beds, or staying together, it made more sense to start booking. So we did.

B made a reservation at a place where they had no three bed rooms but a two bed one that was big enough to put another bed in it. It had a bathroom and an evening meal and breakfast were both available. I have always shied away from the all-in-one package and prefer to stay in cheap accommodation and go out to choose my meal from a menu, but in this case I thought I’d try it. And I won’t lie; it felt good to know we had a bed for the night and that we could take our time getting there because there was no rush.

Once again I have managed to take a grand total of ONE photo all day, and this is it: 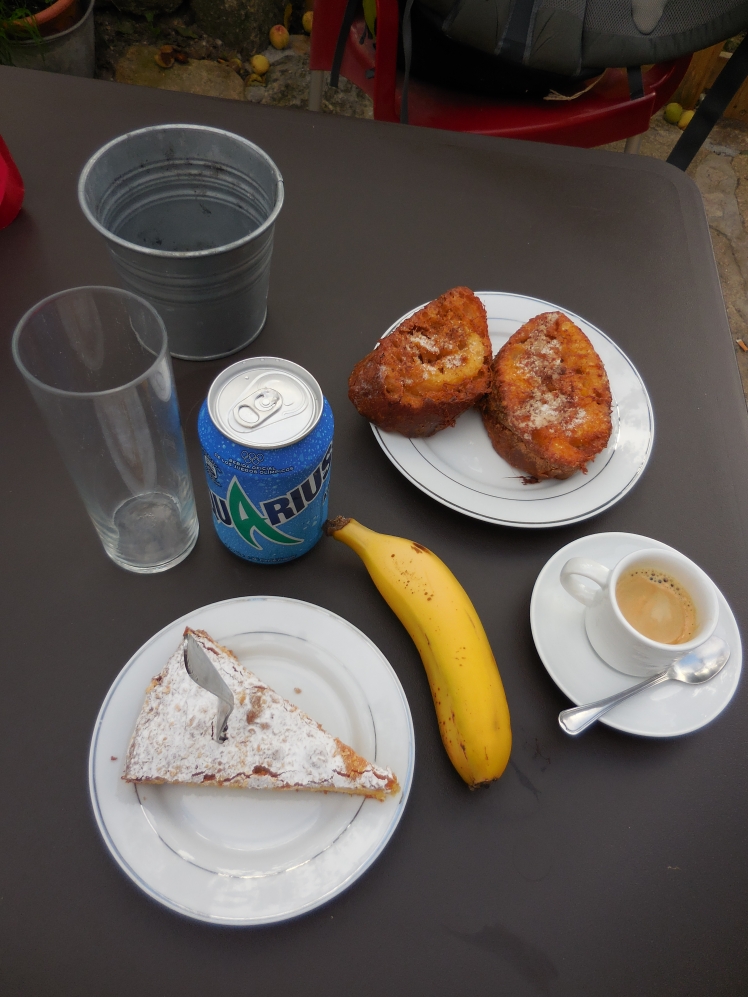 I suppose breakfast (and second breakfast) are important enough to view again and again. Note the very greasy, very crispy, very sweet and very cinnamonny French toasty thing, which was apparently delicious. I stuck to the Santiago cake and banana. Oh and Aquarius, obviously.

We had gorgeous weather again, and the walk was as you would expect: lots of people, lots of teenagers, familiar faces, little villages, sunshine, greenery, cows. The rhythm of the pole dancing (yes, I am now adamant that the word has entirely the wrong meaning). A had decided to send her (ill-fitting) backpack ahead because it was causing damage to her hips, and with only a daypack she flew along the trail in front of B and me. By the time we walked into Melide, her feet were feeling it too, and we decided to have a leisurely lunch in town before we walked the last stretch to where we were staying. We didn’t really know where it was but everyone assured us it would be well signposted.

It was. There was a sign in the woods that took us along a side road towards the main road and Casa Milia was just along there. They had a huge garden in the back where we sat with a cold drink before dinner, and discovered that the Danish lady, T, was staying in the same place! So then we were four at dinner.