I arrived in Astorga by bus from Santiago, and really enjoyed getting the short recap of places I would soon be revisiting rather more slowly and in detail. Also I had ample time to think about Denise and the recent developments in her disappearance – the police had arrested a man they had kept an eye on for a long time, and after questioning he had led them to a place on his property where a body was found. (We have since had confirmation that it is indeed Denise.) This was good and bad news – good because the family and also the pilgrim community would have some answers, and obviously bad, as I had had a small hope that she had gone away for her own reasons. That morning in Santiago I had managed to find a white scallop shell which I would carry for Denise from Astorga to Santiago and deliver to Pilgrim House, where Faith and her coworkers will collect them and keep them until they decide what to do with them. I had also tied a black bow on my pack in memory of Denise and her unfinished Camino. In order to put the Scouse Spouse’s mind (and my own) at ease I had booked a room at the Gaudi Hotel, right next to the Bishop’s Palace, 150 m from the bus station, actually on the Camino out of town and not far from San Javier, one of the big albergues. The plan was to eat at the restaurant in the hotel, as lots of pilgrims from San Javier usually eat there too, and possibly find some walking companions for the next day. As it was, the restaurant was closed, I went for a meal on the square instead and met no other pilgrims.

So when I started out from Astorga the next morning, after realising that I was really out of practice packing my bag – it took ages! – I just walked at my own pace and soon saw other pilgrims on the trail. There is a lot of tarmac/pavement walking to start with, and we formed a long and orderly line out of town. It felt good to be back, to just walk and let my mind wander. It often went to Denise, to her last day, wondering if she felt the same: safe, free, excited. Happy?

Unfortunately Pilar’s El Llar in Murias de Rechinvaldo was closed! She makes the best empanada in the known universe and I was set on having it for my breakfast. Instead I had to go past and into the long flat straight section – the last bit of the Camino Denise would have walked before being lured onto a false trail by the man who wanted to rob her and ended up taking her life. I will not lie: it was a very hard and emotional walk. 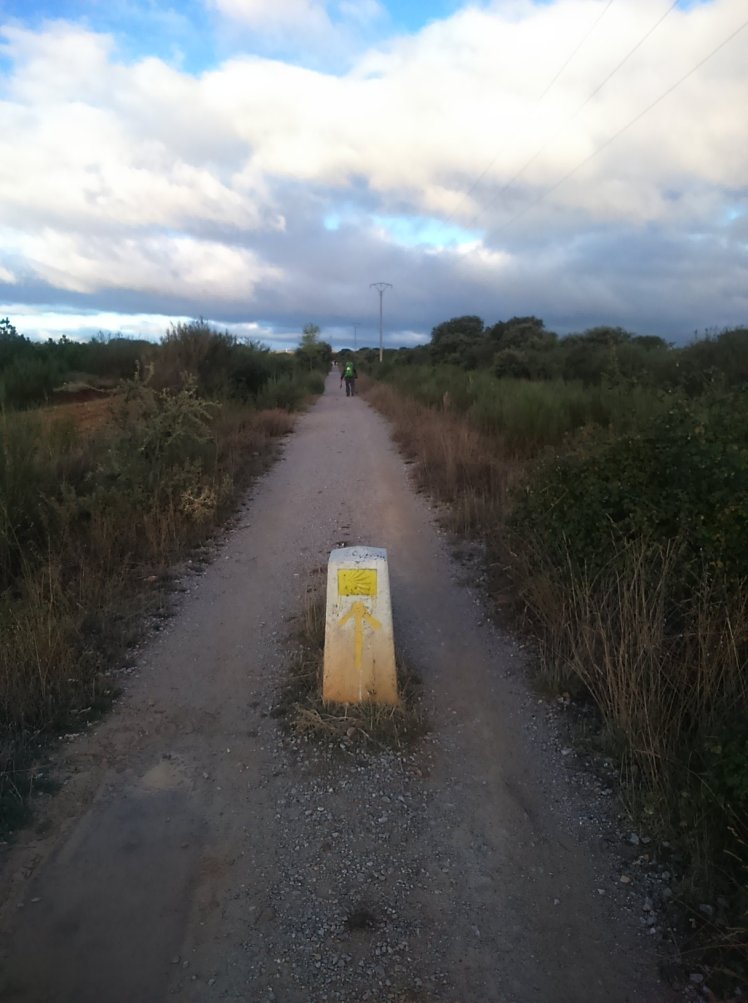 After this section I arrived at Santa Catalina de Somoza and stopped for a café con leche (as you do), and since I hadn’t had breakfast I had some tortilla, a banana and an Aquarius too. Power brekkie for pilgrims!

The rest of the walk went well, though surprisingly quick! I don’t know if it was because of the Pacerpoles (aka jet engines) that made me walk faster, or because I didn’t stop at El Llar (though I did stop at the Cowboy bar), or because I was walking on my own and therefore was speeding up to the tempo I walked with L last year … whatever it was, I arrived at Rabanal just after midday and went straight up to the Gaucelmo, the British CSJ albergue, which I had never stayed at before because I always waltzed into town too late. This time I was 5th in the queue and it didn’t open until 2! My backpack did queueing duty while I sauntered off for a small refreshment in the nearby taverna.

When we were let in to the Gaucelmo, I did as I had planned and opted for a top bunk in a corner. The albergue is great – it has a large garden for chilling, tenting, drying clothes etc, and they serve English afternoon tea with biscuits and cookies at four plus breakfast the next morning, all donativo. So that’s two of my challenges ticked off, and after laundry I ended up talking to the hospitalera (Hi, Kristi!) for a while about what it was like to run an albergue. I got a lot of good info, so watch this space …

In the evening I had a meal at the place where Scouse Spouse and I stayed for our Honeymoon Camino, and after finishing my vino peregrino I went back to the Gaucelmo for an early first night.

My new mystery novel Lost in the Fog will be published September 21, 2020 and is available for pre-order now! In the meantime, please enjoy my travel blog about the 4 months I spent in France, Spain, Portugal, and the Caribbean last year. Mahalo!